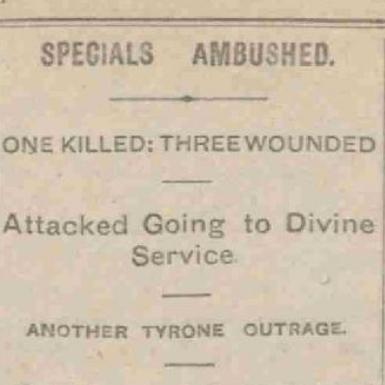 The Ulster Special Constabulary was established in late 1920, in response to the increased outbreaks of violence related to the War of Independence. The Unionist volunteer force, also known as the B Specials, were recruited overwhelmingly from Protestant communities, which made them a frequent target for attacks and reprisals during the War of Independence. In one such incident, reported in the Northern Whig, four constables were ambushed while cycling to their local Protestant church for the Sunday service. One was killed and the others injured.

During the week-end Sinn Féin carried out a number of attacks on police in various parts of Ireland. In County Armagh a number of Specials going to divine service yesterday were ambushed. One man was killed and three wounded.

The following official statement was issued last evening by Dublin Castle: A party of RIC was ambushed at Cregganduff, County Armagh, to-day. One constable was killed and three wounded.

Our Dundalk correspondent wires: An Ulster Special Constable was killed and three members of the same force wounded in an ambush in the village of Cregganduff, County Armagh, yesterday. Constable Samuel Dougold, Hans Leman, Edward Linton, John Fluke, and William Irwin, all stationed at Crossmaglen, left the latter village to cycle to divine service at Cregganduff Protestant Church at twelve o’clock. Nearing Cregganduff they observed three men standing at a bridge. When the constables cycled up these men cleared off. Constable Fluke, who was leading the party, turned the corner of M’Conville’s public-house, and immediately he did so a man darted to the rear of the shop.

The police, who were armed with revolvers, decided to search the public-house. The door had been partially opened in response to their knocking, when a hand grenade thrown from behind a wall opposite the public-house exploded near the police, inflicting minor injuries on three of the party. Immediately the constables opened fire on the men, estimated to number sixteen, who were behind the wall, and their fire was answered by a volley of rifle and revolver fire, accompanied by the throwing of hand grenades, which burnt in the roadway. Constable Fluke was shot dead. About nine bullets entered his stomach and chest, and when found later he was lying on his revolver.

Constable Linton was hit by two bullets in the right leg, and the ankle of the same foot was damaged by a piece of a grenade. He fell, but rose again and returned the fire of his assailants. Dougould was hit in the right hip, as was also Leman when he was proceeding round the corner of the public-house for shelter. Constable Irwin escaped uninjured. No attempt was made to dispossess the constables of their arms, and they, although wounded and bleeding profusely, proceeded to walk back to their station. After they had covered one and a half miles a passing motor car conveyed them to their destination.

The ambush appears to have been well organised. Prior to the arrival of the constables a party of young men cycled into the village. Sixteen bicycles were placed in a ploughed field some distance off, and all people entering the village – those going to mass, as well as those making their way to the service in the Protestant church – were held up and marched into the public-house owned by Mr Patrick M’Conville, the chairman of the Crossmaglen Rural Council. An armed guard was placed over them, while the other armed men took up a position behind the five-foot wall which is directly opposite the public-house. It is stated that some of the attackers were seen to fall, but this is unconfirmed.

When police and military arrived on the scene from Dundalk afterwards no arrests were made, and the civilians engaged in the attack had cleared off. Following the ambush there was considerable tension in the district. A short time ago another Special Constable named Compston was shot dead when escorting a postman from Crossmaglen. The three men injured in yesterday’s ambush were removed to hospital in Dundalk, and inquiries late last night showed that they were progressing favourably. Their wounds are not considered serious. Dongold is a native of Tyrone, Leman of Cullentrough, County Armagh, and Linton of Killylen, in Armagh. The relatives of Constables Fluke reside in Ballydoe, County Armagh.