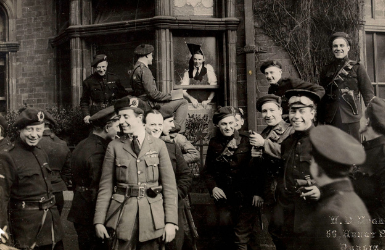 Auxiliary forces celebrate after escaping an IRA attack on their headquarters in Dublin, April 1921. © National Library of Ireland.

Dublin witnessed some of the fiercest fighting and attacks during the War of Independence. In April 1921 the Belfast Telegraph published a series of accounts of recent ambushes by republicans, found among papers captured by the British authorities at Dublin Castle. They detail attacks by IRA forces in various Dublin locations, giving an insight into how British Auxiliary forces were lured out into the firing line. The Telegraph was pleased to report that, in one instance, the Auxiliaries did not come out in response to the sound of gunfire.

Auxiliaries Too Wary. A Trap that was Avoided. More Captured S.F. Despatches

Dublin Castle states: The following are further reports of Sinn Féin ambushes in Dublin, written by officers of the IRA to their headquarters. They were among Sinn Féin documents recently captured by Crown forces.

The first deals with a street ambush in High Street, Dublin, and is as follows:

12th Feb, ’21. To Officer Commanding Brigade from O.C. active service unit: at 3pm on 9th instant prepared an ambush at High Street. Plans were that the Auxiliaries were to be attacked coming from the Castle. To do this I exploded a bomb in Thomas Street. Five minutes after the explosion a force of military came from the City Hall, but the Auxiliaries failed to come out. This is the first time the Auxiliaries have failed to answer by their presence any explosion or ammunition fire. (Signed) O.C. Active Service Unit.

The next report concerns an attack on a car at Dolphin’s Bridge, and is as follows:

February 12, 1921 – To Officer Commanding Brigade from Officer Commanding Active Service Unit – On February 8 I told … men to attack a car at Dolphin’s Bridge containing officers, but this car did not turn up. When coming home two of my men met a Ford car on the Circular Road carrying some Air Force men. Both of them fired at the car. This appeared in the Castle report.

[The Castle report referred to mentioned that a Ford car carrying Air Force patients to hospital was fired upon at this point.]

A further report deals with an ambush on Rock Road, Dublin, at 7:30pm on Saturday 12th February, reads as follows:

Enemy forces, one private covered car, one lorry containing troops, another private covered car, and a second armoured car. Republican force, eleven members of F company, 6th Battalion, under a second lieutenant. The enemy convoy was travelling towards the city from Dun Laoghaire (Kingstown). Fire was opened at them from behind a wall fifty yards south of the gate of the Blind Asylum, Merrion. Five bombs were thrown, two of them exploding on the lorry. Fire was returned by the armoured cars, especially the second car, which entered the gate of the asylum, and sprayed the bushes inside. Our forces fired off about forty rounds of ammunition. The enemy casualties could not be ascertained. There were no casualties on our side. Two civilians were killed, one in his bed near the scene of the ambush and the other on the road about 600 yards on the city side of where the ambush took place. The attacking party were armed with bombs, two shotguns, two rifles, and the remainder with revolvers.

One further report concerns the practice followed by the rebel forces of seeking out individual members of the Crown forces with a view to assassination. It reads as follows:

12th February, ’21. To O.C. Brigade from O.C. Active Service Unit. On Monday last I put twenty armed men into various public houses in Camden Street to see if they could get a shot at the murder gang. Nothing came their way. Next morning every pub in the street was searched. (Signed) O.C. A.S.U.

Auxiliary forces celebrate after escaping an IRA attack on their headquarters in Dublin, April 1921. © National Library of Ireland.