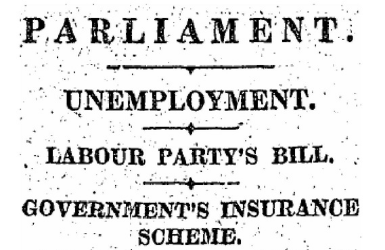 The end of the First World War created an unemployment crisis in Britain. Thousands of ex-servicemen returned from the Western Front only to find that their jobs had vanished, or that they were no longer physically able to carry out their duties due to injury. This extract from the Irish Times reports the speeches made by Sir Edward Carson and Joseph Devlin in a parliamentary debate on increasing unemployment benefits. Though diametrically opposed on most issues, the labour crisis they saw unfolding in Belfast temporarily united the two MPs in their calls for a solution to the problem.

In the House of Commons yesterday, Mr. Clynes asked leave to introduce under the Ten Minutes’ Rule a bill to make provision for the prevention of unemployment, to provide for the proper treatment of unemployed persons, and for other purposes connected therewith. He observed that millions of people were suffering the privations of unemployment.

The bill proposed to place absolutely in the hands of Minister of Labour the whole of the powers for dealing with the problem. Those who refused employment would not be entitled to any support. The principle of the bill aimed at finding productive and profitable employment, and preventing the horror of unemployment, which the Prime Minister in 1919 said ought not to exist in a civilised community and ought to be got rid of for ever. Sir Edward Carson, leader of the Ulster Unionists until 1921. Image courtesy of PRONI.

Sir Edward Carson said that he entirely agreed with those who said that they ought to try and put the solution of this question on a permanent basis. … There was nothing so miserable as a man knowing that he might be out of work when he wanted work. ‘I remember’, said Sir Edward:

… when I was a young professional man myself, foolishly or wisely, marrying before I had a brief, and not knowing when I should get another. Thank God, I have pulled through, but I can feel heart and soul for the man seeing unemployment staring him in the face with a family to be provided for. It is one of those questions, however you may deal with it or talk about it, that the State must solve. (Cheers.) We are trying to solve it by this piece-meal legislation, but you cannot, if you are human and Christians, rest. You cannot tell the people to go and die, and you cannot tell them to see their children starve at home. Of course, you cannot. (Cheers.)

Sir Edward (continuing) said that he was very anxious that this bill should become law at the earliest possible moment … Mr Devlin and himself had a joint interest in this matter. A great number of people, especially those in the linen trade in the North of Ireland, through no fault of their own, were out of work. It was, therefore, very important that this bill should be passed at the earliest possible moment. Mr Devlin congratulated the House on the spirit in which it had approached that problem. The House of Commons never presented itself in a better light than when it was free to discuss a matter of a non-party character, and dealt with a question such as this in a large spirit of humanity. (Cheers.)

The question was one of the most vital that they had to consider, because the tragedy of industrialism was to be found in unemployment. It meant so much misery to the unemployed man and to his family. It was pathetic to see an able-bodied man anxious for work that he could not get, but it was more pathetic to find little children suffering from hunger and want because of the defects in our industrial system.

Therefore, he wished to congratulate the Minister of Labour upon the introduction of that bill, although he would not say that it was the most satisfactory solution to the problem. It would be a sorry commentary on the statesmanship of that House if the last word had been said in regard to unemployment. An enduring solution was the only way to meet the problem … and it was the function of the State to fashion machinery by which work could be provided. Article from The Times complaining about the lack of young women entering into domestic service.
Read More A report from the Freeman’s Journal on fears of the corrupting influence of dance halls on young people.
Read More Report from the Belfast News-Letter on attacks on soldiers and civilians in Cork.
Read More A speech by Bishop Charles Gore condemning the British government for permitting reprisals against Irish civilians during the War of Independence.
Read More A note in the Belfast News-Letter on recent patrols by the Ulster Special Constabulary.
Read More An article and cartoon from the Sunday Independent on the situation in Egypt and its comparisons with Ireland.
Read More A report from the Irish Independent on the latest debates about land ownership.
Read More Newspaper coverage of the international football and rugby fixtures in February 1921, both of which saw Ireland play host to Scotland.
Read More An extract from The Irish Times speculating on the upcoming elections for the new ‘Northern’ parliament.
Read More A report from The Irish Times recording speeches by Edward Carson and Joseph Devlin on unemployment provisions.
Read More An American visitor to Dublin warning of the dangers of emigration.
Read More Report of attacks in Cavan and Armagh as part of the so-called ‘Belfast Boycott’.
Read More