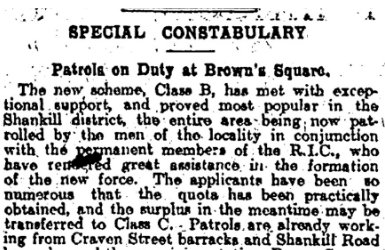 The Ulster Special Constabulary was established in December 1920, in response to increased violence across Ireland related to the War of Independence. The volunteers, also known as the B Specials, were recruited from Protestant communities as reinforcements for the Royal Irish Constabulary, and to defend against attacks by the IRA. Here, the Belfast News-Letter reported on recent patrols by the USC in Belfast, carried out with the support of local officials.

The new scheme, Class B, has met with exceptional support, and proved most popular in the Shankill district, the entire area being now patrolled by the men of the locality in conjunction with the permanent members of the R.I.C., who have rendered great assistance in the formation of the new force. The applicants have been so numerous that the quota has been practically obtained, and the surplus in the meantime may be transferred to Class C. 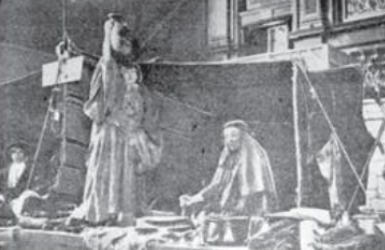