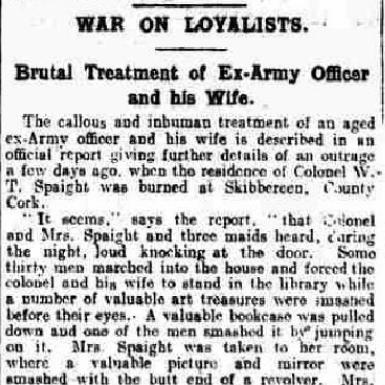 Some of the fiercest fighting and attacks during the War of Independence occurred in the south-western county of Cork. Much of the area was a Nationalist stronghold, which made it a target for reprisals by British military forces – most notoriously when the city of Cork itself was burned by Black and Tan forces in December 1920. In April 1921, a colonel’s house was burned down by dissident Nationalists because the colonel’s wife had allegedly suggested that more Black and Tan forces needed to be deployed in the area. Reported in the Belfast News-Letter, the incident underlined the loathing towards Black and Tan forces; it also showed the violence and destruction that underpinned so much of everyday life during the War of Independence.

War on Loyalists: Brutal Treatment of Ex-Army Officer and his Wife

The callous and inhuman treatment of an aged ex-Army officer and his wife is described in an official report giving further details of an outrage a few days ago, when the residence of Colonel W.T. Spaight was burned at Skibbereen, County Cork.

‘It seems’, says the report, ‘that Colonel and Mrs Spaight and three maids heard during the night loud knocking at the door. Some thirty men marched into the house and forced the colonel and his wife to stand in the library while a number of valuable art treasures were smashed before their eyes. A valuable bookcase was pulled down and one of the men smashed it by jumping on it. Mrs Spaight was taken to her room, where a valuable picture and mirror were smashed with the butt end of a revolver. Mrs Spaight was then taken on to the lawn to watch the furniture being loaded into carts.

After this the colonel and his wife were marched through a stableyard to the steward’s house, being prodded in the back with rifles. As they walked from the steward’s house they were compelled to watch the burning of their own house. A crowd of raiders, accompanied by horse carts and donkey carts, were seen moving away after the house had been destroyed. The report adds that the only reason for this outrage seems to be an accusation made by one of the gang to Mrs Spaight to the effect that she had suggested that ‘Black and Tans’ should be brought into the district.