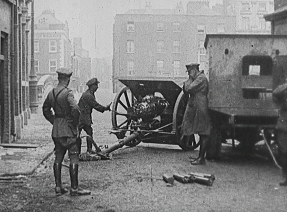 The Irish Civil War lasted for almost a year and cost the lives of over 900 people. The conflict was rooted in disagreement over the Anglo-Irish Treaty, which was narrowly endorsed by Dáil Éireann by 64 – 57 votes on the 7th January 1922. The pro-Treatyites were prepared to accept the British monarch as head of the southern Irish state and dominion status as a ‘stepping stone’ to freedom. By contrast, the anti-Treatyites saw this compromise as capitulation and betrayal of the republican ideal.

For six months there were no hostilities between the pro- and anti-Treatyites, but there was much jockeying for position. Opposing factions of the IRA occupied barracks and buildings vacated by the withdrawal of British forces in the first half of 1922. In an effort to stop the slide to civil war Eamon de Valera (the leading anti-Treatyite) and Michael Collins (the leading pro-Treatyite) agreed an electoral pact for the general election to be held on the 16th June 1922. However, this pact alarmed the British government and pressure from Britain contributed to the decision by Irish Free State forces to attack the Four Courts in Dublin on the 28th June 1922 (which had been occupied by anti-Treaty forces), marking the beginning of the Irish Civil War.

Michael Collins, the most popular and able of the leaders of the pro-Treaty side, was killed on the 22nd August 1922 when his convoy was ambushed between Macroom and Bandon, Co. Cork. This contributed to a significant escalation in the conflict in September 1922 when Dáil Éireann endorsed the creation of military courts, with the power to impose the death penalty.

A ceasefire was called on April 27th, 1923. Ireland’s social and political landscape had been radically transformed.