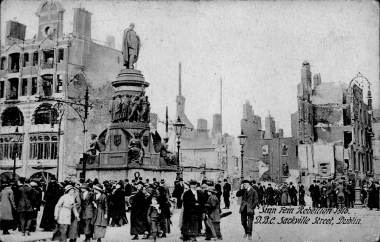 The Easter Rising was masterminded by a small group of key figures within the Irish Republican Brotherhood (IRB). Members of the IRB helped to establish the Irish Volunteers in 1913 as a counter measure to the rise of the Ulster Volunteer Force (UVF). Those who fought for the rebels during the Easter Rising were a coalition of radical republicans, cultural nationalists and socialists.

With Britain actively involved in the First World War, the leaders of the IRB, including Tom Clarke, Sean MacDermott and James Connolly, planned an uprising in Ireland in April 1916. Artillery and ammunition were due to arrive from Germany ahead of the insurrection to arm Irish Volunteers outside of Dublin. The Aud, the ship on which the cargo was being transported, sunk off the coast of Cork before the arms could be unloaded and distributed to the rebel forces.

The Rising began on Easter Monday, April 24th, 1916. Patrick Pearse read out the Proclamation, The provisional government of the Irish Republic to the people of Ireland, on the steps of the General Post Office in Dublin. A largely Dublin based battle unfolded during Easter Week before the rebels eventually started to surrender on Saturday 29th April.

The seven signatories of the Proclamation were executed in the following weeks along with other key figures of the Rising. In all, 14 men were executed from 3rd – 12th May, 1916, by court martial. A graphic novel charting the actions of William McFadzean, one of the first men from Ulster to die during the battle, is available to download and view.
Read More