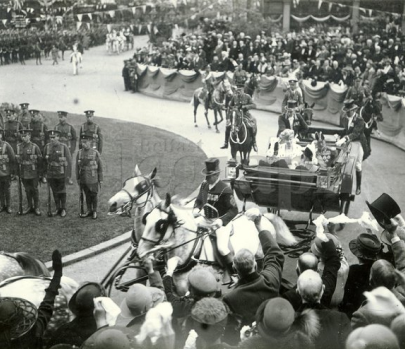 Following the First World War’s conclusion, the British government established a committee tasked with replacing the 1914 Home Rule Act with new legislation, led by Walter Long. The Long Committee reported in November 1919, recommending the creation of two Home Rule parliaments, one based in Belfast with jurisdiction over all nine counties of Ulster, and one in Dublin that would govern the remaining 23 counties. A Council of Ireland would link the two parliaments in areas of common interest.

By the time of Long’s report, Ulster Unionists (though still attached to remaining solely under Westminster’s authority) had accepted some degree of self-government from Belfast, with many believing that it represented the best chance of protecting their own self-interest in such a volatile political landscape.

However, Long’s provision for a nine-county Ulster parliament, with a slim Protestant majority, created unease among Unionists. Unionists argued that a nine-county state, which would include a total Catholic population of 43 percent and three counties with clear Nationalist majorities, would be too unstable. A six-county alternative was proposed instead, incorporating Antrim, Down, Armagh, Londonderry, Fermanagh, and Tyrone, where the Catholic population together accounted for only 34 percent. A four-county option, featuring the counties with the strongest proportion of Protestants, was deemed too small to be economically viable.

Although they had accepted the principle of partition in 1916, only on 10 March 1920 did Unionist MPs decide not to oppose the Government of Ireland Bill, to the dismay of southern Unionists. At about the same time, the British government acceded to demands for a six-county ‘Ulster’.

However, the War of Independence and the existence of Dáil Éireann meant that the proposed Dublin Home Rule parliament was never established. In contrast, King George V opened the Northern Ireland parliament on 22 June 1921 at Belfast City Hall. On his way to the state opening he passed by Unionist banners that read ‘We will not have Home Rule’, an indication of the complex and deep-seated feelings provoked by the new legislation.

Partition in effect created two permanent and substantial religious minorities on the island of Ireland. While both governments were keen to stress toleration, the perception of a ‘Catholic state’ in the south and a ‘Protestant state’ in the north quickly became ingrained in both minority communities.

The new Northern Ireland state, however, did not encompass all of Irish Unionism. In the three excluded Ulster counties of Donegal, Cavan and Monaghan alone, 70,000 Protestants were stranded in what became, following the Anglo-Irish Treaty, the Irish Free State.