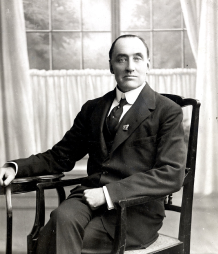 Ulster’s Unionist population mobilised in massive numbers on 28 September 1912 with almost half a million men and women joining Sir Edward Carson to sign the Ulster Covenant and Women’s Declaration – an oath declaring their opposition to Home Rule and a Dublin based parliament.

The following year, the Ulster Unionist Council established a provisional government for Ulster while more than 100,000 men joined a newly inaugurated militia, the Ulster Volunteer Force (UVF), to defend Ulster from a Dublin parliament if Home Rule came to pass. Following a threatened mutiny in March 1914 by senior British Army officers who refused to fight against their Ulster kin and the UVF’s importation of a mass shipment of arms the next month, these combined events were part of what has been called ‘The Ulster Crisis’.

Home Rule was a desire for self-government for Ireland: a devolutionary measure that would have seen some powers of autonomy transferred to a new Dublin parliament while the majority would be retained at Westminster. Nationalists, who were largely Catholic, were in favour of the measure, and under the leadership of Charles Stewart Parnell from 1880 and from 1900 John Redmond, the Irish Parliamentary Party represented the bulk of eligible Catholic voters and had allied itself with the British Liberal Party in order to secure Home Rule.  A Home Rule parliament would have received fewer devolutionary powers than what Stormont has today but at the time, was seen as a thoroughly radical measure.

Attempts at implementing Home Rule were first made in 1886 and 1893 but the crisis over the Third Home Rule Bill was where Ulster came to the fore. Irish Unionists, who were mainly landed and part of the Anglo-Irish gentry, had led the opposition to Home Rule when the first two Bills were proposed. Yet by 1905 opposition had drifted northwards, particularly in Belfast, which was the centre of protest during the crisis of 1912–14. There were a wide variety of reasons why Unionists opposed Home Rule ranging from religious concerns, fears over citizenship in a Catholic-dominated parliament, economic reasons, class differences with the largely Catholic rural peasantry, and concerns over Empire.

Each of these concerns were mobilised to different degrees to consolidate Unionist Ulster’s opposition. When the Third Home Rule Bill passed its third and final reading in the Commons, it was set to come into operation on 18 September 1914. However, its implementation was suspended due to the First World War and the unresolved issue of whether Ulster would be included in a Home Rule parliament based in Dublin.